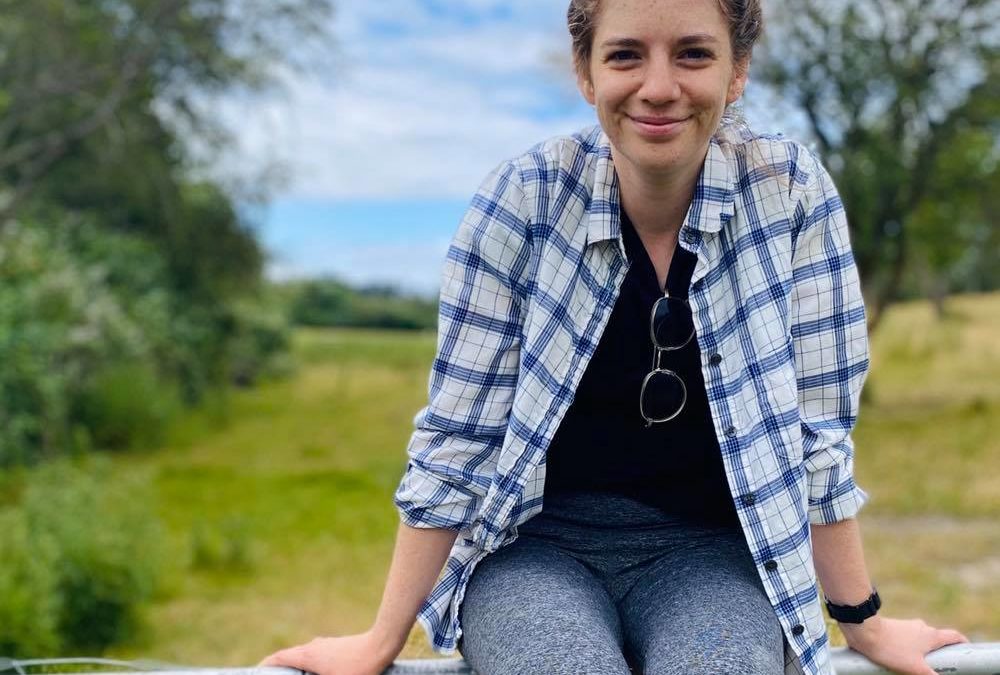 Playwright Ellery Lamm is two-time winner of Pick of the Fringe for Best Original New Work, Best Drama (2019), and for Overall Favourite Show, Bravest Show (2018). Ellery’s new play, Backliners, brought to you by SKAM Young Company, was set to premiere at this year’s Victoria Fringe Festival before the Fringe was cancelled. Fortunately, the show is still happening this Thursday and Friday via livestream!  In her own words, Ellery shares the inspiration behind Backliners, and her influences as a writer.

1. The plot of Backliners is very original and quirky. What inspired you to write this play?

I got the idea for Backliners while watching an amateur improv group perform in the basement of a library. They… uh…weren’t amazing? But it didn’t matter because I spent the entire show watching everyone on the backline — the row of performers watching the scene, waiting to jump in. They were engaged, laughing at everything, and so supportive of each other. I was instantly curious about the dynamics of a team of people who are in such a vulnerable performance space together.

I relate to each character in different ways. But I was inspired to write Murphy’s (lead) character because once in high school, I signed up for a week-long summer improv course and had so much anxiety about it that I couldn’t stop vomiting and had to drop out! Thinking back on that experience made me want to see what would happen if an improv team was made up of anxious, shy teens and not necessarily the type of people we associate with comedy — extroverted, loud, bubbly. I was a very quiet and shy teenager and always felt like something was wrong with me for not being the first one to speak in a group. Backliners is an ode and celebration of quiet teens.

2. Reading the script, I got some The Breakfast Club vibes. Do you get inspiration from other works when writing your pieces? What works have most influenced you as a writer?

I fully copied Fleabag’s asides to the camera for Murphy. The Breakfast Club vibes are totally there too, though I didn’t see them until watching an early rehearsal with the cast. There’s something so classic and pleasing about a motley crew thrown together. I’ve recently been really inspired by Netflix series about young people: Never Have I Ever, The Babysitter’s Club, I Am Not Okay With This and Atypical all stick out to me. I’m inspired by anyone who’s able to write about young people and not condescend to them. There’s so much fantastic YA literature and TV/movies “for teens” that are lightyears ahead of media “for adults,” in terms of representation, diversity, and clever writing.

3. How did you get started as a playwright?

I am a playwright 100% by accident. In my second year in the creative writing program at UVIC, I wanted to take a fiction and screenwriting class but they were both full. Playwriting wasn’t, so I decided to give it a try. Here we are!