Going All the Way

Note: This is a staged reading; the play is in a development phase.

Best friends Avery and Beatrice have spent their whole University degree creating off-the-wall performances, but their final project is outside of everyone’s comfort zone: teaching sex-ed to middle-schoolers through puppetry. The show takes a turn for the bizarre when years of resentment and confusion bubble up, leaving the two of them hashing out their issues with sex, love, and identity in front of an increasingly restless audience.

We acknowledge the financial support of the Province of British Columbia.

The talkback sessions will feature creators Hannah Mariko Bell (she/her), Sophie Underwood (she/her), Kiley Verbowski (she/her) and cast members Lynnéa Chan (she/her) and (she/her). Following the show, there will be a 10-minute break where folks are welcome to use the washroom if they are staying for the talkback. The talkback will be approximately 15 minutes.

When booking tickets with other people, we strongly recommend booking them together in the same transaction or using the same name. This is due to the fact that seating for all performances is limited and if you wish to be seated beside a specific person following the recommendations is the best way to ensure getting seated together.

Please note: In response to COVID-19 we have limited the capacity of each performance to 35 patrons.

Email Francyne at [email protected] with your preferred performance date and amount of tickets. Upon any refunds or ticket cancellations for your specified performance, you will be contacted with a chance to book your tickets for the show.

What are our COVID-19 Protocols?

Because the Satellite Studio is a smaller enclosed space we require all our audience members to wear a mask. BC vaccine passports will be checked upon entry of the SKAM Satellite Studio, please bring a piece of ID along to confirm your vaccination status. We are also keeping the show nice and intimate by keeping it to an exclusive 35 seats per show.

Thank you for helping us to create a safe space.

Disclaimer: This is a theatrical protrayal of sex education and not meant to be an accurate depiction or used as an example for comprehensive sex ed curriculum.

All performances will take place at the Satelite Studio (849 Fort Street), which is wheelchair accessible. The SKAM studio has 2 gender-neutral washrooms and 1 accessible washroom. There is only one ASL Interpreted Performance, which is available on a first-come, first-served basis (see dates below).

For more information about accessibility at SKAM and at our general productions, please visit our accessibility page or email Hannah at [email protected].

Theatre SKAM offers American Sign Language interpreted performances. These performances will include an interpreter, who will stand on the seating level to the audience’s right side of the stage and interpret the audio of the entirety of the performance.

Where can I find parking, bus stops or bike racks?

Parking
There is no designated parking for the Satellite Studio. There is metered street parking along Fort Street, which is free after 6 PM. Take a note of which spot you park at, there’s a number on a stanchion and make sure that you have your license plate number ready. The nearest pay station is one/two doors down from the Satellite Studio. The parking can also be paid for with the ParkVictoria app (Credit only). Cash is an option at the paystation. The nearest parkade is the Broughton St. Parkade (entrance is located at 745 Broughton St.).

There are no direct bus stops in front of the Satellite Studio but there are bus routes nearby:

Many other routes also stop within walking distance of the Satellite Studio along Yates and Douglas Street.

Loreto is a Chilean actor who graduated from the Fernando González Mardones Acting School (academiaclubdeteatro) in Santiago de Chile in 2016. Most of her work has been in theater for young audiences, performing in different schools with Teatro Educativo, as well as in important venues in Santiago with Municipaldesantiago.

Loreto has also done several commercials and music videos, including two one for local artist Jade Bell (jadebellandblindfocus). Here in Victoria, Loreto has performed in community theater (Peninsula Players, St Luke’s Player), in Victoria Conservatory of Music’s Opera Studio 2022, she has worked under the direction of Puente Theatre residency’s winner Niah Davis (Gorgó) and in the last cabaret by Atomic Vaudeville, Pandemonium: Master in Pieces.

Loreto and her husband moved from Chile to Victoria in July 2021. She’s very grateful for the welcoming and friendly people from Victoria and is thrilled to be a part of Going All the Way!

Tiffany is a graduate of the Canadian College of Performing Art’s 2022 Studio Ensemble. She is a voice actor, musical theatre performer, writer, and an enthusiast of devised theatre. Tiffany recently performed in the cabaret Pandemonium: Master in Pieces (Atomic Vaudeville). Growing up in small town Alberta, Tiffany learned to play piano, violin, guitar and train horses. Now she’s an emerging artist with a passion for original work and a love for collaboration.

Hannah is a pansexual, fourth generation Japanese Canadian. She is a graduate of the University of Victoria’s theatre program (BFA with Distinction, 2019) where she took a comprehensive approach to her theatre education. Her first production, Kansha, was produced as a part of Intrepid Theatre’s YOU Show 2018-2019 season with support from the Victoria Nikkei Cultural Society and the National Association of Japanese Canadians Young Leader Fund. Hannah’s goal as a theatre practitioner is to engage different communities through positive representations of Japanese culture, as well as challenge audience perspectives through a variety of theatrical practices. Hannah is a member of UNIMA West and a member of the National Association of Japanese Canadians Young Leaders Committee. Hannah is currently working on a shadow puppet adaptation of Momotarō.

Devon is a Theatre Production & Management graduate from the University of Victoria. Stage management credits include Summer Bucket List (Collectivus Theatre), Comic Potential (Phoenix), three shows through SATCo, and many others. She spent her final semester at the Phoenix Theatre as the Production Stage Manager for four shows. She is currently working as the Production Stage Manager for Bury the Hatchet which will go up at the Belfry Theatre in June 2022. Devon hopes you enjoy Going All the Way, and looks forward to watching all of your wonderful reactions to it! 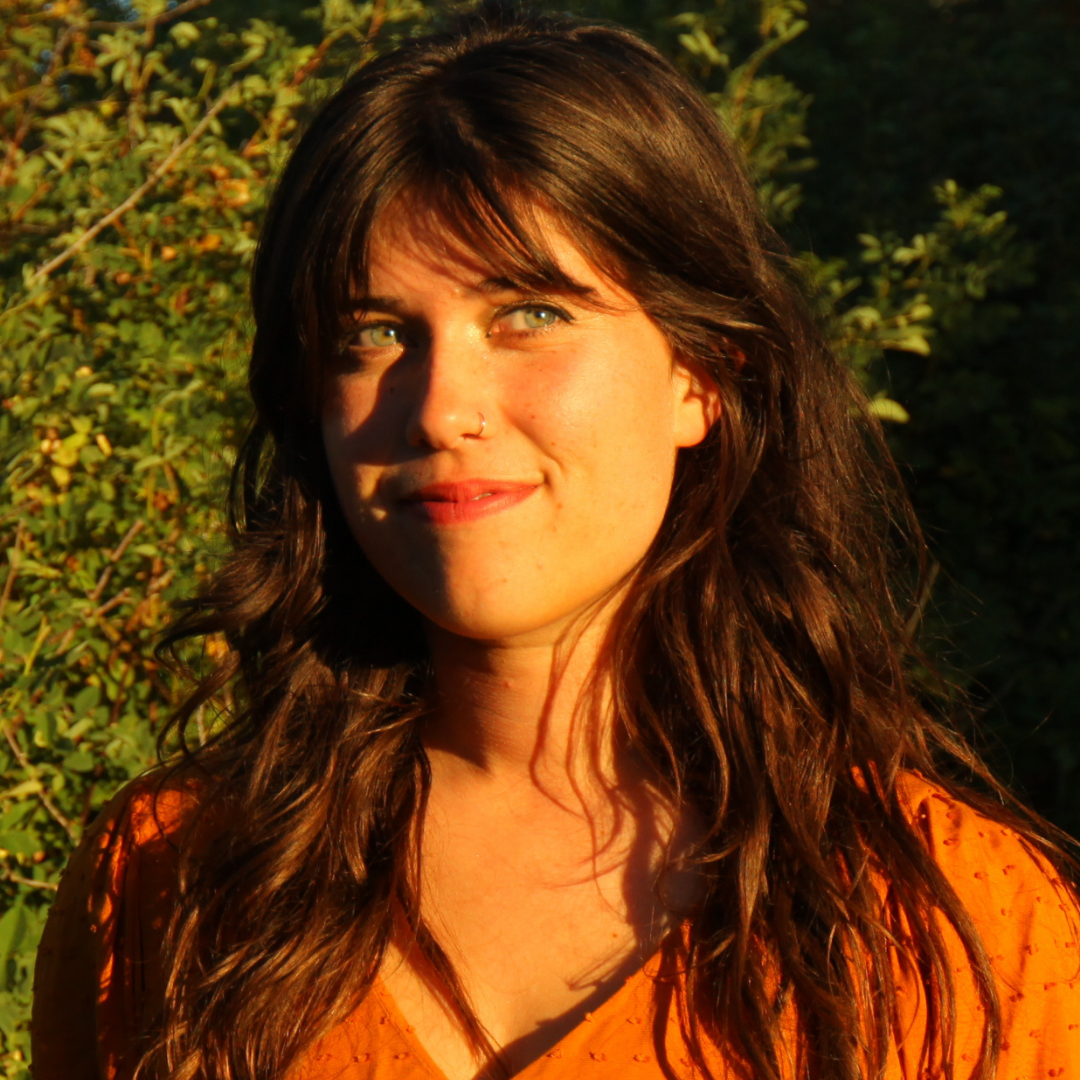 Sophie is a writer, puppeteer, and actor residing on unceded territory of the Songhees, Esquimalt, and W̱SÁNEĆ First Nations. She has written for both stage and screen, with works produced by the Belfry Sparkfest, the Victoria Fringe Festival, the Student Alternative Theatre Company, and Less Bland Productions. Sophie has been lucky enough to perform as a puppeteer and actor in local shows and short films, and has trained with Kaleidoscope, the Phoenix Theatre, and the Banff Puppet Theatre Intensive. This year she is looking forward to developing a new work with the Belfry Incubator Project and continuing to grow Over the Moon Puppet Theatre, a company she co-runs with collaborator Kiley Verbowski. When not writing, Sophie fills her days playing with puppets, kids, and new ideas.

Kiley is a writer, reader, and puppeteer, playing on unceded territories of the Songhees, Esquimalt, and W̱SÁNEĆ First Nations. She co-owns Over the Moon Puppet Theatre, which develops and performs short puppet plays for kids, and some experimental video works. She also writes journalism and memoir in between her dozen odd jobs. She is grateful to have multiple theatre projects in development this year, including a suitcase theatre show through the Belfry Theatre’s New Incubator Project.

Leah is a sexual health educator that utilizes her theatre training to create engaging workshops and online content for people of all ages. She is also the host of The Love Doctor podcast where she shares research-informed advice about sexuality. Currently, Leah is a postdoctoral fellow at the School of Public Health and Social Policy at the University of Victoria. She completed her PhD in Applied Theatre at the University of Victoria where she worked with older adults and youth creating a theatre performance about sexuality across the lifespan. Her research expertise is focused on knowledge mobilization and community arts-based practices to address sexual health.

A big thank you to Tim Gosley for aiding in the puppet building!